Dignity and the Death Penalty:
A Conversation with Cardinal Wilton Gregory and Sister Helen Prejean

Dignity and the Death Penalty:
A Conversation with
Cardinal Wilton D. Gregory
and Sister Helen Prejean

Cardinal Gregory has written extensively on a consistent ethic of life and life issues, including pastoral statements on the death penalty, racial justice, and euthanasia/physician-assisted suicide.

Sister Helen Prejean is an outspoken advocate for abolishing the death penalty in the United States and is best known for her book, Dead Man Walking, which was turned into a feature film. 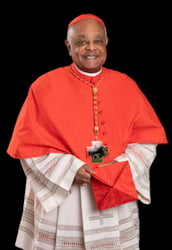 This webinar is brought to you by a partnership of RENEW International with the  Roman Catholic Archdiocese of Washington’s Offices of Life Issues and Social Concerns. The webinar is moderated by Sr. Terry Rickard, OP, President of RENEW International and Ms. Genevieve Mougey, MDiv, director of the Office for Social Concerns for the Roman Catholic Archdiocese of Washington.

Be sure to check out the resource Dignity and the Death Penalty: Evolution of Catholic Teaching, based on Sister Helen's work and created in conjunction with the Catholic Mobilizing Network.